Laughter is most likely not the first thing you think of when you are asked to reflect on your job. Except perhaps if you are a stand-up comedian or a circus clown. But maybe we should start including the sheer concept of ‘laughter’ when planning our work. Both for ourselves AND for the people we employ. Perhaps it should even be a required trait when we employ both leaders and new team members. 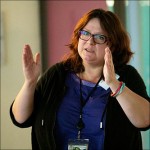 I recently went into a brown study listening to a podcast of ‘The Life Scientific‘ from BBC radio 4. The guest was neuroscientist Professor Sophie Scott who has been studying what goes on in our brain when we laugh, and what laughter does to us — both as individuals and as a key to building meaningful relations between people.

In her studies she’s apparently found out that despite what Nieztsche says about ‘humans being the only animal able to laugh’, several other species have been proven to have this ability.

According to Professor Scott, laughter is the strongest bond builder there is between humans — and perhaps between all mammals.

It’s a behavior we think is about amusement, but actually it’s about affiliation, agreement and affection.

So what connection does this have to making your business grow? Well, I’m almost inclined to say; If you can’t see the obvious connection, your not worthy of running a business at all.

After watching several interviews with Sophie Scott et al, and reading various papers on the topic online over the past couple of days, it seems obvious to me that honest natural laughter (in contrast to premeditated humor) is, in many cases, the number one conveyor of good communication. Think of a couple of good seminars or keynotes you attended. Who did a good job — who didn’t? How did the good speaker attract and keep the attention of the audience throughout his or her speech?

With a minimum of booleans everyone can find documentation of laughter’s ability to build bridges and create room for people to collaborate with others, reaching higher goals and achieving better results. The great mystery to me is:

Why do so many bosses around the world limit their employees’ room to laugh? When, deliberately or not, it keeps the team or whole department from reaching the stars (to be a bit grandiloquent).

Countless companies around the world have banned employees’ use of social media. With the excuse of an asserted security risk, bosses want to control their employees and minimize time waste as colleagues exchange amusing pictures of pets and family members or share jokes found online.

But what if we turned this (hopelessly old fashioned) way of trying to control people around? What if you as a leader encouraged your employees to find the ‘joke of the week’ and then run a vote every Friday among the staff deciding the best laugh of the week? Do you honestly think your crew would perform worse or produce less? Think about it!

Eric Tsytsylin who is an MBA Student at Stanford Graduate School of Business (class of 2014) has been looking into this idea of actually using laughter as a powerful tool to boost happiness, creativity and productivity.

I’ve tried both scenarios. Both the happy and cheerful workplace and the all-too-serious-no-joking-around one.

At the first one everyone either were or ended up being high performers. Everyone was ready to give the job extra hours at any given time to help colleagues or leaders out or when the company landed big orders. The number of days employees reported in sick were few and people always stepped in when it occasionally happened. Here the leaders made sure employees were allowed to do fun stuff every now and then, and often either planned or participated in fun events — both at work and off-site.

In my experience, the opposite scenario is all but productive. Employees only do what is necessary to complete their tasks and colleagues only reluctantly stay after hours to finish a task — and only when asked specifically by their boss. It takes no scientist to figure out this type of leadership requires even more control and bossing around. The rare social events always end with colleagues secretly complaining about work under the cover of loud music.

Do you know either of these two scenarios? Where would you prefer to work? In which of those two departments would you want to be a leader?

Has this string of unfiltered thoughts spawned your interest in how to improve your life, your relations, and your workplace with laughter, I can only recommend you contact either Professor Sophie Scott, MBA Student Eric Tsytsylin, or do a field study at Happier.com HQ in Boston (contact founder Nataly Kogan).

Did I miss out on anything? 🙂

– Sophie Scott – How we learn to laugh (video)

Happier without the sour bungle

Social Media is mostly about... me!