Jim Al-Khalili – An Ambassador of Science

One has to keep one’s mind fit and up-to-speed, when a global financial crisis leaves the number of possibilities at a low. Obviously a good deal of physical exercise helps – be it a jog in the woods or a swim in the pool. But by accident (or incident) I stumbled across a guy who has caught my full attention in the past few weeks, causing me to leave behind sneakers and several books, and exercise my brain instead. 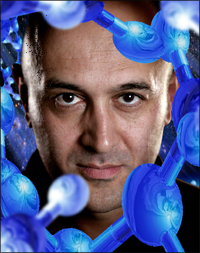 It all started a Sunday morning during the summer. I was surfing the internet to find some information for the 7-year-old’s science homework. I stumbled across the 2007 BBC Four production ‘Atom‘ – hosted by a, at least to me, completely unknown guy called Jim Al-Khalili.

As a child I was spellbound by Sir David Attenborough’s series about nature and evolution. To this day he is one of the top three persons I’d love to meet, and one of the main reasons why I kept on prioritizing biology classes from 3rd grade in Primary School all the way through High School. Attenborough is not only a vast well of knowledge – he is a blessed communicator, making even very complex zoology and geology comprehensible for a boy of 10.

Professor Al-Khalili is the Attenborough of Physics!

The Iraqi-born Brit is not only a highly skilled scientist. He is a formidable communicator who masters the rare talent of being able to convey advanced physics and other elitist science to the average person.

I strongly urge everyone to watch the three-episode series ‘Atom‘ or other work by Al-Khalili. Then you will know what I mean, I’m sure. And ‘NO!‘ you don’t have to be a Master in Theoretical Physics to understand what Higgs Boson is, how the Large Hadron Collider works, or how time bends through space… Just listen to Al-Khalili explain. Then suddenly you will understand things about the world and the universe that you thought were far beyond your stressed-out brain’s apprehension.

Like a real teenage fan of a pop star, I began searching for everything about Jim Al-Khalili – his background, his merits, works and of course for sources to more physics-info narrated by him.

As if my excitement wasn’t big enough already after watching the TV-series, I found out that BBC Radio 4 runs a weekly broadcast called ‘The Life Scientific‘ hosted by… Professor Jim Al-Khalili.

Here the OBE awarded Professor spends half an hour every week interviewing scientists, scholars and Nobel laureates in various fields of science. As the vigilant listener you get to learn recently discovered stuff about how our brains work, how science today has great influence in politics, how genetic studies can help various illnesses, or how the universe may be just a part of a much larger multiverse. The audience of this cast is also introduced to the humans behind these often groundbreaking studies. Scientists who have private lives, too. Lives that sometimes interfere, influence or even merge with their discoveries.

I was especially touched by the the story of Professor Colin Blakemore. During his studies of brain development he used animals for testing. Some of the results has had tremendous positive influence on the treatment of for instant child blindness. Though I myself don’t fancy the use of test animals at all, I was very baffled by the amount of threats and the extent of harassment Blakemore and his family suffered during that period. His children were evacuated from school and the family received deadly mailbombs. All because of Blakemore’s studies.

Al-Khalili just turned 50 in September 2012. So with a little luck there should be many years of science dissemination conveyed by him to look forward to.

You can subscribe to ‘The Life Scientific‘ via BBC Radio 4 or directly on iTunes.

I found the third and final part ‘Atom – The Illusion of Reality’ online. Watch it when you have an undisturbed and vacant hour.